I attended the Speech and Audio in the Northeast (SANE) 2019 conference at Columbia University last Thursday, and in this post, I will try to summarize some of the invited talks that I found interesting and a few of the posters that I spent some time at. (If a talk or a poster does not feature here, that probably just means I don’t work in that field or I don’t have sufficient background to understand the work.) 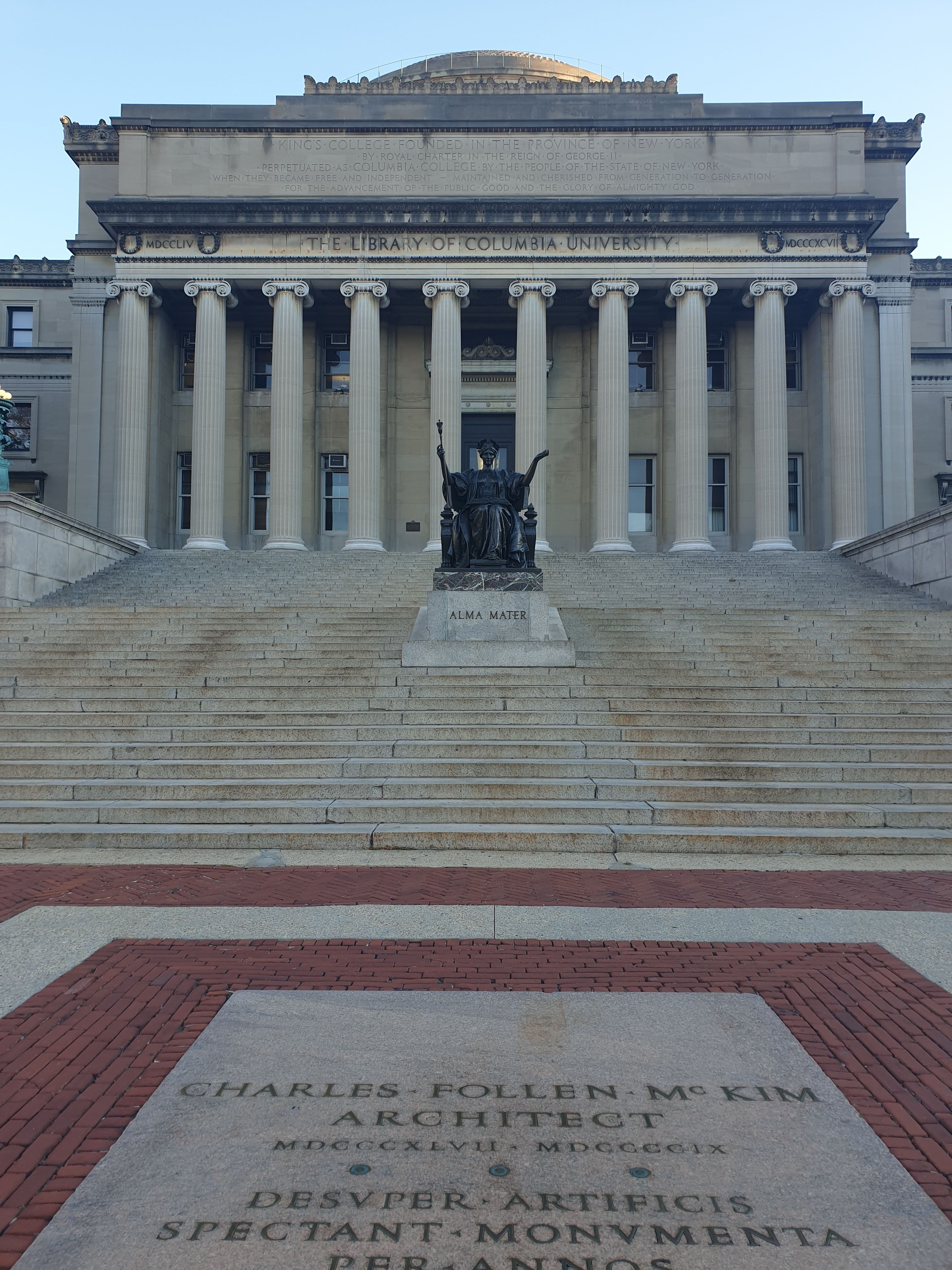 There were 2 parts to the talk: 1. How to train large DNNs fast? 2. Estimating information flow in DNNs.

How to train large DNNs fast?

Dr. Kingsbury summarized some of his group’s recent work on data parallel algorithms ([paper 1] [paper 2]) for acoustic model training. They train windowed BLSTM acoustic models with a cross-entropy per frame objective. This can be done in the following ways:

Although the authors have only tried this on BLSTM architectures for now, similar methods have been used for convolutional networks in vision, to the same effect. The group is also planning to use these techiques for faster training of end-to-end ASR systems, and those with transformers.

There has been a lot of effort for understanding DNNs, and most of these fall into one of the following 4 categories:

This work falls into the last category, and the authors use the popular Information Bottleneck approach. In essence, we can think about DNNs as a means for learning representations ($T_l$ is the representation leart at the output of layer $l$ of a DNN) of the input $X$ which can be helpful to predict the output $Y$. To do a good prediction job, the DNN needs to maximize $I(T_l;Y)$. However, to generalize better to unseen inputs, it also needs to minimize $I(T_l;X)$.

Earlier efforts in this direction have always dealt with deterministic DNNs, and used binning to estimate $I(T_l;X)$. The hypothesis is that training comprises 2 stages: (i) fitting, where $I(T_l;Y)$ and $I(T_l;X)$ increase rapidly, and (ii) compression, where $I(T_l;X)$ decreases slowly.

However, this estimate is only valid for very small bins, which makes the computation expensive. Furthermore, the authors showed that the binning estimator actually measures the clustering of samples in $T_l$ and not $I(T_l;X)$ itself. This is because this latter quantity is constant or infinite in deterministic DNNs, so its measure is vacuous.

Instead, the authors propose a method called auxiliary noise DNN framework, which injects a Gaussian noise at every layer which is small enough such that the $T_l$ does not change much. The MI is then estimated as

Prof. Livescu’s talk was about acoustic and acoustically-grounded word embeddings. Usually (in NLP), when we talk about word embeddings, they measure semantic similarity. Instead, what if we wanted embeddings that could measure acoustic similarity? Such embeddings could potentially be useful for many tasks such as spoken term detection, query by example, and even ASR.

There’s an important difference between regular word embeddings and acoustic word embeddings. With the former, you can just have a list of words in your vocabulary and a vector corresponding to each word. However, when words are spoken, they may sound different every time if the speaker varies, or even for the same speaker depending on words in context. Here is an overview of Prof. Livescu’s work in this domain:

The second part of the talk was on “acoustically grounded embeddings”, which can be seen as a multi-view extension of acoustic embeddings, where we have the written instance in addition to the spoken instance. The key observation was that for the majority of words, the acoustic embeddings were found to cluster around the written embeddings, and improved results were obtained for word discrimination task. Finally, in an ICASSP’19 paper, they use these acoustically grounded embeddings to build an “acoustics-to-word” (A2W) ASR system, obtaining a 13.7% WER on the 300h subset of the Switchboard dataset (compared to 11.8% WER using a TDNN-F based Kaldi recipe I recently trained). She mentioned that they plan to extend their work to subword embeddings.

Here is their implementation.

Gabriel started his talk with an interesting question: What is really end-to-end (in context of ASR)?

Why choose end-to-end over hybrid as a researcher? It is simpler and more hackable.

The talk touched upon several projects that he had been involved in at Facebook. Here are some highlights: 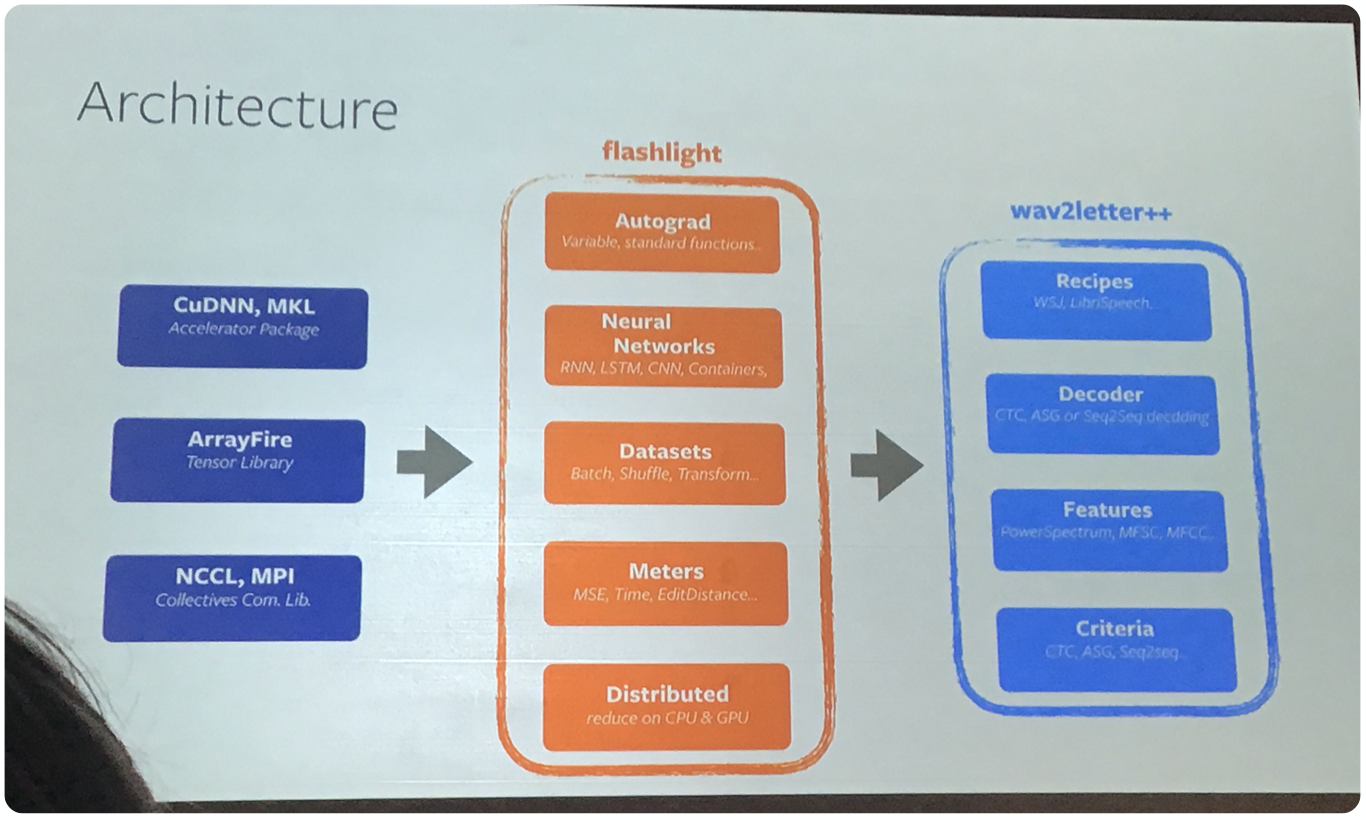 Weiss’ talk was about progress in speech-to-speech generation at Google, and was mainly divided into 3 parts: (i) Speech-to-text translation, (ii) Parrotron, and (iii) Translatotron. The popular LAS model and Tacotron are used as building blocks for most of these tasks.

There were also some other interesting talks which I haven’t detailed here:

The complete list of posters can be found here. Most of the presented work was in the domain of audio source separation/classification and signal processing in general, which is outside my domain of research. However, I found 2 very interesting posters that I spent most of my time at. 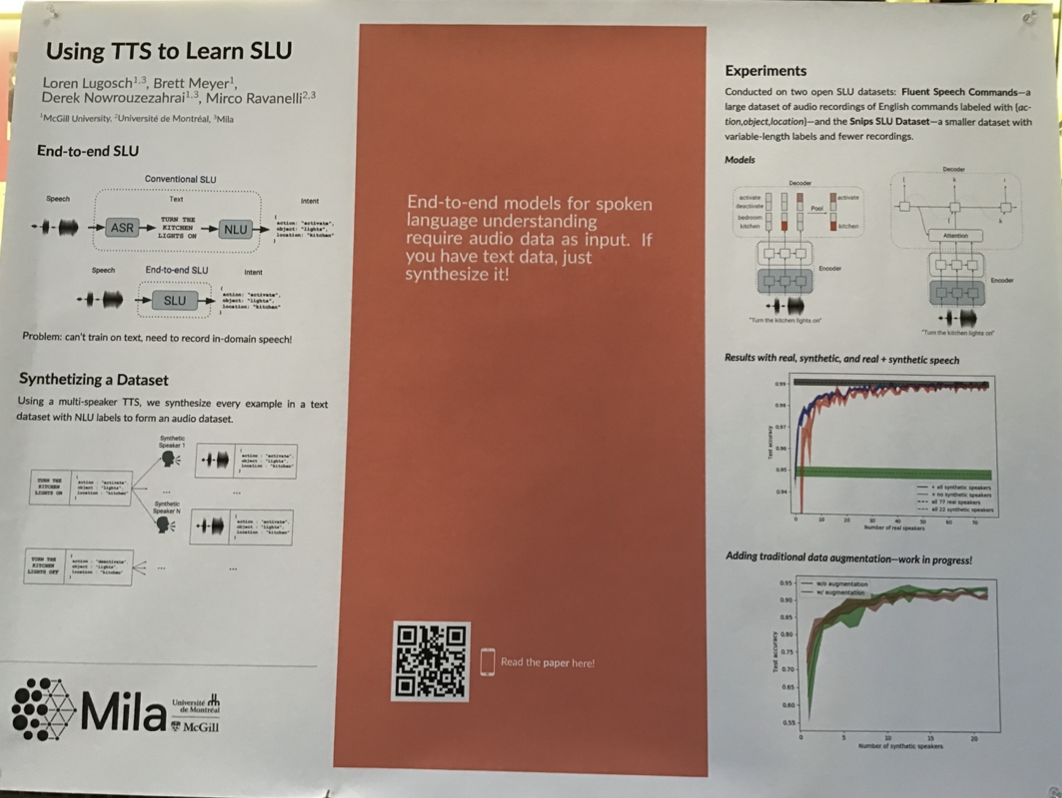 Although the idea is simple, there has been immense interest recently for using TTS systems for augmentation in ASR, especially since synthesis seems to have become better. It is not a new idea (backtranslation style augmentation, and one-hot speaker adaptation has been done earlier), but it is probably helping more now because of advances in TTS. 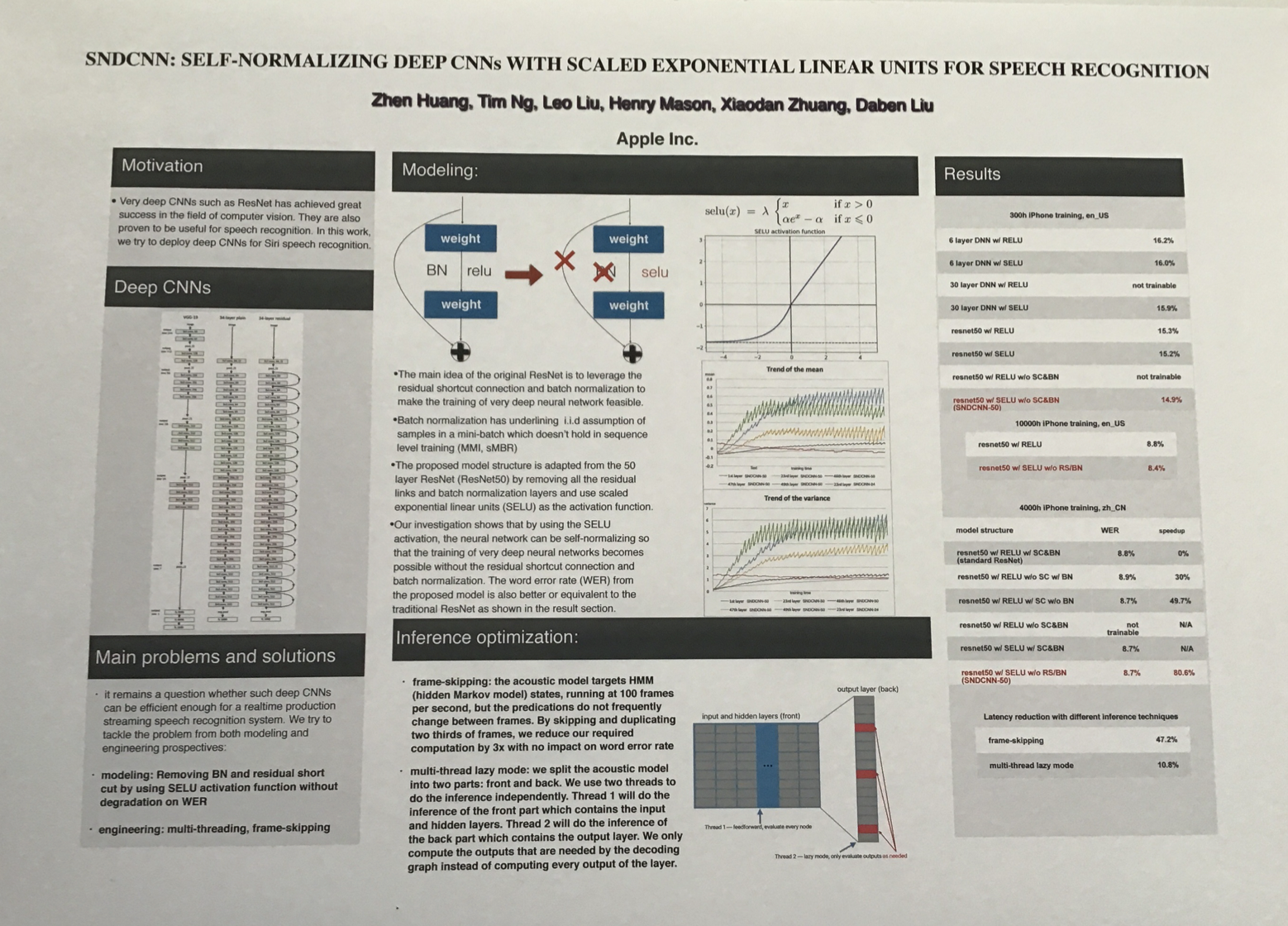